”Past the Peak”? NOT! Too eager to order the reopening of his broken economy early enough to salvage his stumbling 2020 campaign, the U.S. President claimed on 2020 April 15 that the country was “past the peak” of the COVID-19 outbreak. It most definitely is not! And his Sharpie cannot control the spread of this virus any better than it could change the path of a hurricane, nor is the coronavirus an opponent he can bully. Now, whom to scapegoat this time around, when the hospitals continue to fill until one by one too many ER units go through the same hell of which New York City still holds the lease? At most, New York City’s acceleration flattened out for the first two weeks of April, but then the gas pedal has stubbornly stuck itself in high gear; and even the Big Apple has not reached the summit. Meanwhile, most of the data continues to be driven by New York – our “elephant in the bath” – along with California and Washington, both of which handled the crisis far better than states whose future has yet to learn it the hard way. Watch for New York’s headaches to spread north into New England, south into Virginia and the Carolinas, and west through Pennsylvania into the Midwest. I still anticipate seeing the Administration’s rosy 60k threshold reached – then breeched on the fly without taking a breath – by the end of April, now more than ever. If anything, the foolhardy moves that will be made under the dark cloud of this utterly false past-the-peak reading will cost the country – and ultimately, the world that the U.S. will now infect – more lives than necessary. [ARL 2020 April 15 CDST 17:46]

In a feeble attempt to distract focus on the US Administration’s own mismanagement of the COVID-19 crisis, the latest attempt to direct false blame against a scapegoat sees the US ruler suspending funding of the WHO, based on lies about the international agency’s leadership throughout the emergency. Even the simplest charts tell a different story, as U.S. deaths shot past the world’s in March even as the US federal government waffled and blame-shifted and openly refused to accept responsibility. [ARL 2020 Apr 15] 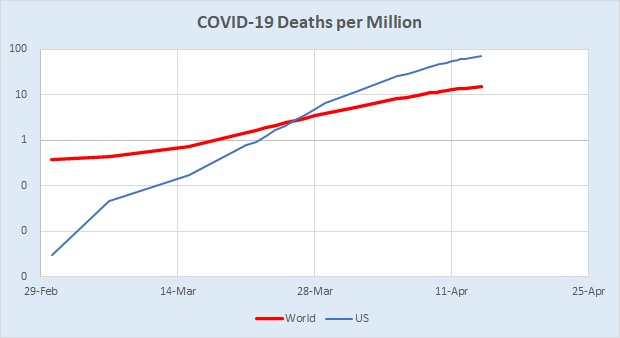 Not Yet Time to Relax! Political opportunists quick to blame their own mishandling of the pandemic on medical professionals are chomping at the bit to re-open local businesses and the national economy. As I noted several weeks ago, the fast acceleration of the crisis in the US slowed after the end of March. But the pace has flattened since then through the first two weeks of April, even as the “elephant in the bath” – New York – has done its best to shine up the stats. Even the mere political hype of defunding the health professionals in favor of the economists and political hacks sends the wrong message, encouraging the public to abandon preventative measures too soon. More than ever, I anticipate seeing the U.S. reach the 60k death threshold by the end of April, and that milestone passing by in a blur as the deaths continue at too fast a pace well into May if not beyond. The following chart is on a semi-log scale, showing the slightly lower pace through the beginning of April, but not bending noticeably further downward for the past several weeks. And now that we can discard our best advisers to suit our scapegoating, don’t be surprised should it bend back north. [ARL 2020 Apr 14]

New COVID-19 cases in the United States. We’re watching for this to peak before an echoing peak in daily deaths — 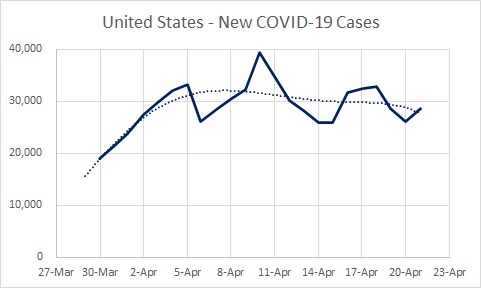 The daily toll of deaths in the U.S. shows signs of peaking by mid-April, but other evidence suggests that “peak” to have come largely as the effect of a data anomaly related to reporting. Don’t be too surprised if the final third of April shows further rise above the level that would have been shown if the anomaly had been spread through the second week of April —

Given the steady climb in the number of active COVID-19 cases in the U.S. through the first 3 weeks of April, it is tempting to look at the graph of active cases the same way we might look at a graph of cumulative cases or cumulative deaths. Don’t. Cumulative counts will never peak and drop back down, except in the incidental case of correction of previous miscount. In contrast, we want to see the graph of active cases peak and drop back to zero. Yet here, we have not yet seen signs of a peak, despite some possible signs of peaks for new cases and the daily death toll. So note this: that the trend for active cases assimilates numerous factors into a single measure (somewhat like a pension funded ratio combining into one index the pension plan’s liability measures, asset experience and other factors). So for instance, both new cases and the daily death toll could peak and then slowly recede; yet if the daily tally of new cases still exceeds the daily tally of case closures, then the number of active cases will continue to climb. And even if the daily death toll subsides, any steady increase in active cases will increase the stress on the healthcare system, the workforce and other social institutions and networks.

So all things considered, this graph does not show promising signs. We need to see it slow its rise, then maybe at least flatten out without threatening to reignite, then ultimately turn downward again. So far, not even the models seem to be able to predict with any confidence when any of that might emerge. [ARL 2020 Apr 21 7:13]

Those who wish to look at the bright side frequently point to the rising count of recoveries. But while we rejoice at each and every closed case that ends without death, the recovery count needs to rise far more above the death count than it has so far. If the past month’s experience for recovery versus death were to remain intact for the current active cases — then, eventually, for future new cases — then (as I will begin calculating shortly, now that we have a sufficient history to rely on) the eventual death count is going to be several multiples above the Administration’s current ultra-rosy, unrealistic projection of 60k, perhaps even far above my standing projection of 130k. And yes, we look forward to medical breakthroughs — eventually even a vaccine — but unfortunately, likelihood of medical advances improving these numbers soon is low, while the high stress of the growing overload piled on hospitals keep the near-term numbers dangerously negative. [ARL 2020 Apr 21 CDST 17:35]

This crucial factor raises as many questions as it answers. Many individuals – including political leaders, medical professionals, law enforcement and other first responders, and other key individuals … not to mention any individual who has received a positive test result – will be tested multiple times. Segments of populations tested will vary from test site to test site; and the stage of pandemic spread within different groups being tested will vary. But all things considered, we will frequently come back to this basic number: how many tests are being done? And given how critical testing will be to recovery prospects, we want to see this graph show strong, steady growth. So far, it is not doing so. [ARL 2020 Apr 21 CDST 7:56]

Expressed in terms of numbers per million of population, nearing the end of April the United States has more than 8 times the count of new COVID-19 cases as the average of the same metric for the entire world. [ARL 2020 Apr 25 CDST 14:01]

In late March, some U.S. states shrugged at the COVID-19 threat, saying, “We’re not New York” like it was meant to be proudly displayed as a lapel button or a bumper sticker. Mind you, every state declared a health emergency, since such a declaration was necessary for eligibility for federal disaster relief – that is, “We’re not New York, but please give us whatever funding you decide to give to New York.” Except that by mid-April, the more appropriate banner should read, “We’re not New York … nor New Jersey.” Then by the end of the 3rd week of April, “We’re not New York nor New Jersey … nor Rhode Island nor Pennsylvania …” By the end of May, it’ll pretty much have to read, “Most of our state – except for our largest cities – ain’t like the rest of the country.”

See, the way to slow down and stop the spread of COVID-19 isn’t to put signs up at the state border telling the virus what geographical border it’s crossing. If social distancing and other cautionary measures are not adopted, the pandemic will spread into every region, perhaps more slowly with less population density and less mobility, but still quite inexorably toward the same ultimate levels experienced in the streets and subways of Manhattan.
Here then, in this section, I will open the U.S. regional portion of my work by defining a gradually expanding region. We’ll start by treating New York as if it were a separate country, segregating the remainder of the country as “US sans NY.” Shortly, we’ll essentially let New York annex New Jersey for purposes of this exercise. Then probably Rhode Island, and so on.
How far, I wonder, must this thought exercise persist in the reality of the situation before people get the point? We’re all New York. We have to solve this together, else we are altogether at risk. [ARL 2020 Apr 21 CDST 11:02]

Sans New York, new COVID-19 cases for the remainder of the nation have remained relatively constant throughout April. In this instance, that “We’re not New York” boast catches a sour twist to it: in the aggregate, those who are not New York are not showing the recent hopeful improvements being experienced in New York —

Of course, I’ll be keeping tabs on the tally of deaths, cases, recoveries and other elements. But as I turn focus on distinctions between various jurisdictions, I will want to be comparing percentages of populations, of population densities, and of other sets within which each element is cast. For instance, see the comparable graph for New York. 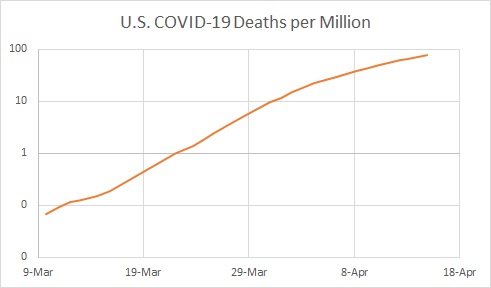 And from late last week, charting days-to-double for March 9 through April 9 for COVID-19 deaths in the United States — 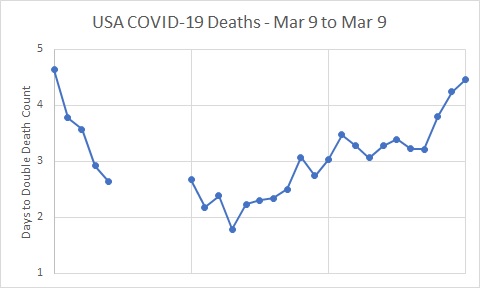 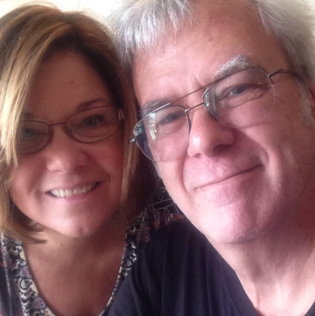