The daily number of new COVID-19 cases in Alabama has remained relatively constant at 200 throughout April. Although not yet meeting CDC guidelines for relaxing mitigation efforts, the state’s lockdown order will expire soon. [ARL 2020 Apr 27 CDST 14:55]

Has Alabama reached the pandemic peak yet? The trend line for new deaths — a key index expected to rise during the early phase of an outbreak, reach a peak, then fall back to zero — through April 19 suggests a recent decline; but discrepancies in data call a firm conclusion into question. More likely, the state has been maintaining a relatively constant number of daily deaths through the first 3 weeks of April — 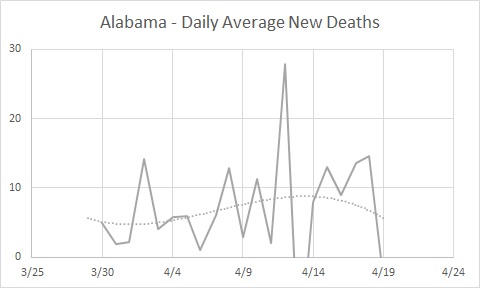 COVID-19 cumulative deaths per million of population in Alabama through April 13, compared with the same index for the United States and Texas — 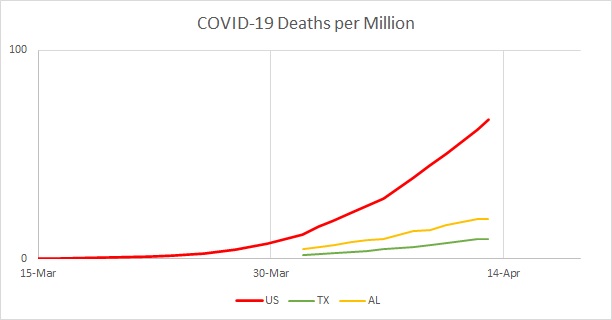 The COVID-19 daily death toll in California reached an early peak in mid-April, but the state may not have yet seen the worst of the pandemic.

COVID-19 deaths per million of population in California through April 13, compared with the same index for Texas and for the United States without New York — 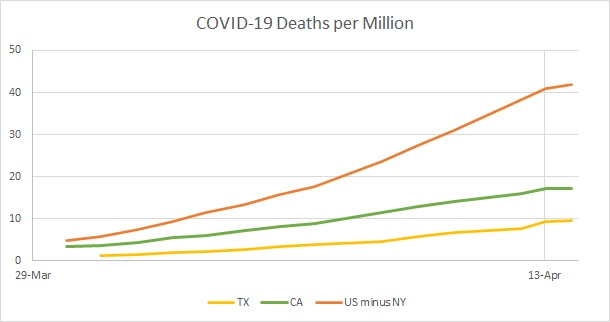 I95 Corridor member Connecticut seems to remain uncertain which direction to go with new COVID-19 cases. Between the zigzags, the average through April has been holding relatively steady throughout April at 800 per day, much like Texas. For contrast, see the steady decline in new cases reported by Florida. [ARL 2020 Apr 28 CDST 11:20]

Florida has taken a fair measure of heat over relaxed standards, such as keeping beaches open late into the beginning of the outbreak and then re-opening them rather earlier than many thought wise. But as of the end of April, Florida can look back at a month marked by steady progress against the pandemic’s spread.

Florida offers a fairly good picture of the peak that large mobile states should reach for. New cases reached a summit of around 1200 per day the first week of April, but since then have steadily declined to around 700, with strong signs of continuing that decline. In contrast, see Texas — where a level month-long plateau of 800 per day is pretended to be “consistent” improvement — or Connecticut, which has also remained stuck zig-zagging around an 800-er-day plateau. [ARL 2020 Apr 28 CDST 8:56]

COVID-19 deaths per million of population in Louisiana through April 13, compared with the same index for the United States and Texas — 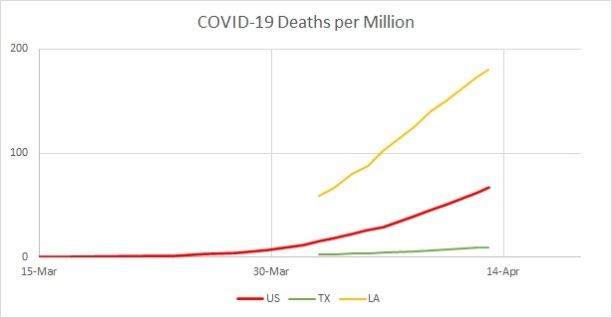 It’s not immediately clear to me which pair is the “outlier” set here — Jefferson and Orleans; or Lafayette and East Baton Rouge. I’m tempted to speculate the oddballs being the upper pair, suspecting that Mardi Gras booster jets may have sent them into orbit. Toss those two to the side, and the entire remaining universe shows less than 1000 cases per parish, with most of those along the slope we find present in most other data universes —

The daily death toll continues to rise in Maryland at the end of April.

New COVID-19 cases in Michigan bulged up above 1,500 per day early in April. The state brought that number down to about 1,000 by mid-April, but the trend may be turning back upward near the end of the month. The number of new cases for Michigan has kept pace with that of Texas for the latter part of April, although Michigan carries that burden on about 40% of the population size of Texas, so proportionately the prevalence of the virus is higher in Michigan than in Texas. [ARL 2020 Apr 27 CDST 15:09]

Mississippi is one of the states announcing earliest re-opening steps, although the state is not in compliance with CDC guidelines for relaxation of mitigation stages: new COVID-19 cases in Mississippi have risen relatively steadily throughout April. [ARL 2020 Apr 28 CDST 14:08]

As of April 7, Mississippi counties generally display the expected relationship between COVID-19 cases and population density. Hines County, with the state capital Jackson and the highest population among Mississippi counties, has the highest number of cases. DeSoto is part of the Memphis metro area. And Harrison has population concentrations in Biloxi and Gulfport. I’ll be watching Mississippi in the coming days — New Orleans isn’t the only gulf spot showing signs of infiltration by the virus. 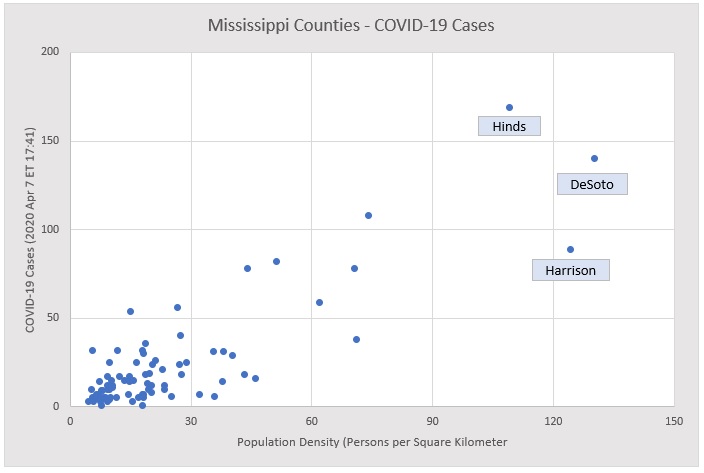 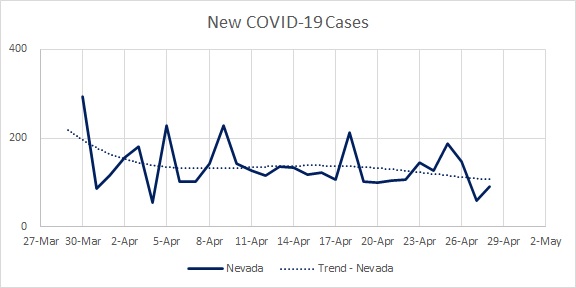 New COVID-19 cases in Nevada have been slightly declining since mid-April, after remaining nearly constant on a plateau of around 135 daily through the first half of the month. [ARL 2020 Apr 27 CDST 14:30]

While new COVID-19 cases in New York have subsided slightly since mid-April, New Jersey has remained stuck at about 3,000 new cases per day throughout April. While the incoming traffic has not increased, it remains above the level of case closures, so the number of active cases in the state continues to climb, adding more pressure to New Jersey’s medical resources. This chart needs to see a trend downward … soon! [ARL 2020 Apr 21 CDST 18:10] — 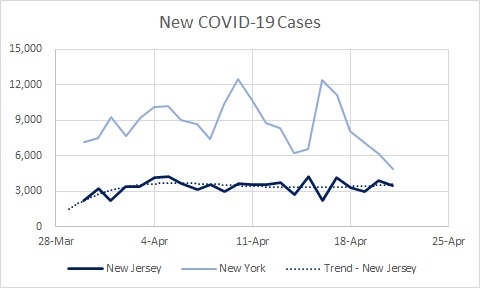 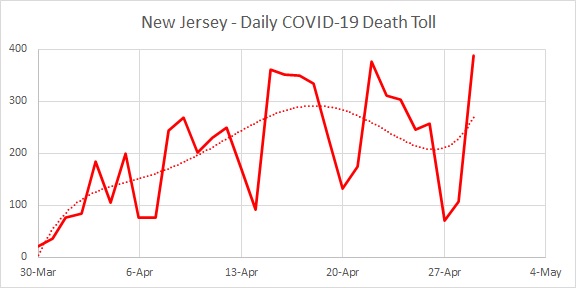 While the worst of the pandemic appears to be behind neighbor New York, the daily death toll in New Jersey continues to climb through the end of April.

COVID-19 deaths per million of population for New Jersey through April 13, compared with the same indices for New York and the United States [ARL 2020 Apr 13] —

After remaining relatively constant at close to 10,000 new COVID-19 cases per day through mid-April, new cases may be subsiding for the state of New York. We want this trend to continue toward zero, or at least for the incoming flow to fall far enough below closures to give the state’s hospitals some relief [ARL 2020 Apr 21 CDST 17:58] —

Casual observation of aggregate U.S. numbers through the first half of April has those with a political agenda glossing over the source and meaning of those numbers. Yes, there has been a slightly lower rate of increase since the beginning of April than we witnessed during the latter half of March. But let’s start digging deeper by separating New York — which has in fact been making progress, thanks in large part to the NY governor and the mayor of NYC and the people of New York — but the rest of the country has not kept pace. As shown in the following chart, yes, the country sans New York did slow the pace of COVID-19 deaths, from a rate that doubled the death count about every 3.5 days to nearly 8 days. But that improvement failed to match New York’s progress of improvement from a doubling level of about 2.5 days to 9. The message? Not only is it way too soon to be contemplating lifting restrictions in New York, but by and large the rest of the country should be considered to be lagging behind. [ARL 2020 Apr 14]

Driven largely by explosion of the coronavirus crisis in New York City, COVID-19 deaths per million of population for the state of New York soars high above the national average through early April, largely driving the national trend (and hiding any local trends in jurisdictions with smaller population). [2020 Apr 12]

COVID-19 deaths per million of population in Pennsylvania through April 13, compared with the same index for Texas and for the United States without New York —

During the 3rd week of April, Texas was the first state to announce its intention to begin re-opening its economy. Then on April 27, the Texas governor set forth an executive order taking concrete steps to re-open, while at the same time overriding health control efforts in force in specific jurisdictions that were battling the pandemic on the front lines. The governor claimed that the state had met CDC guidelines for relaxing safeguards. It had not. New COVID-19 cases had wavered back and forth over a constant 800 per day since the beginning of April, while active cases and the death toll had continued climbing and testing remained far below the level necessary to safeguard the public. One can only hope that the state administration’s risky premature moves do not come back to haunt the public; but the virus itself may too easily disregard our prayers. [ARL 2020 Apr 28 CDST 8:13] 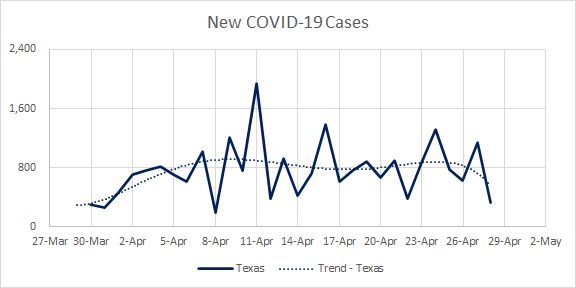 The count of new COVID-19 cases in Texas has zig-zagged around a plateau of around 800 per day since the beginning of April, with no lasting sign of improvement until the last day or so … and we risk losing that gain on the heels of the state administration’s choice to prioritize short-term economic relaxations over longer-term health considerations. For a similar 800-oer-day plateau, see Connecticut; but by contrast, see the steady improving trend of new cases in Florida. [ARL 2020 Apr 28 CDST 8:24]

Although Texas was the first state to announce steps toward re-opening its economy during the 3rd week of April, the state had not yet reached the pandemic peak widely reported. New deaths — a key index expected to rise during the early phase of an outbreak, reach a peak, then fall back to zero — continue a rising trend through April 19 —

Through the early half of April, the pace of COVID-19 deaths in Texas slowed, as seen on a chart of the days it would take for the death count to double: doubling every 4 days near the start of the month, but slowing to a rate of doubling only about every 10 days by mid-month. Curiously (and no, this is not a phenomenon shared by every state), the trend in the days-to-double index for Texas kept pace almost exactly with that for the state of New York (although, of course, New York was keeping that pace on a much larger base for the number of deaths). [ARL 2020 Apr 14]

COVID-19 deaths per million of population in Texas through April 13, compared with the same index for the United States — 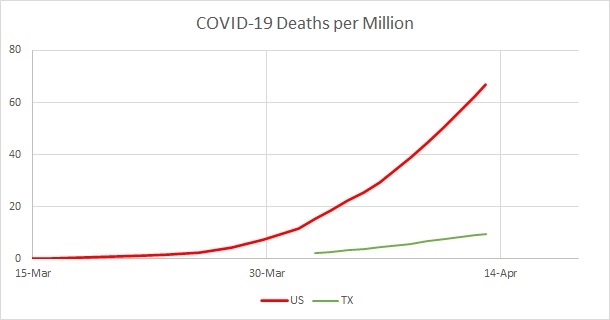 Texas counties, charting COVID-19 cases (vertical axis) according to population density (horizontal axis, measured by individuals per square kilometer), for March 28, April 19 and April 27. Conclusion: Except for the least-densely-populated counties, the state of Texas has not yet clearly reached a peak in new COVID-19 cases, hence should tread cautiously in the direction of any state-wide “re-opening.”

Further comments on this chart — 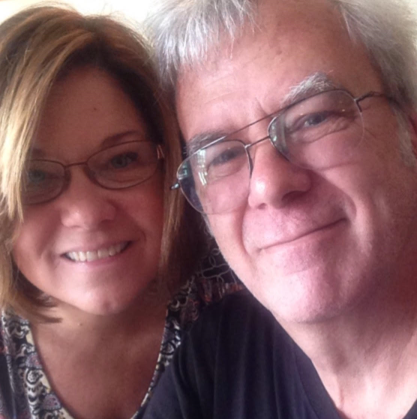 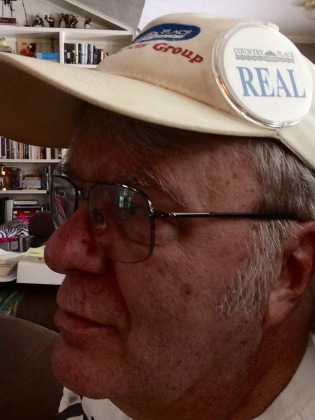 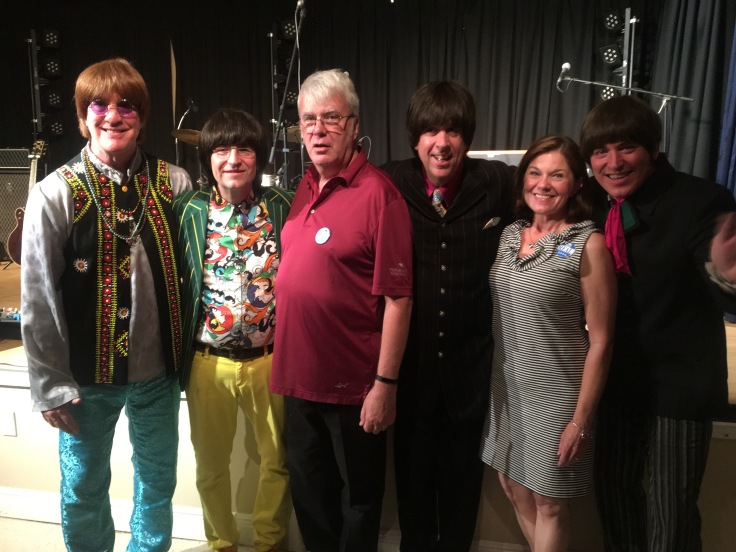